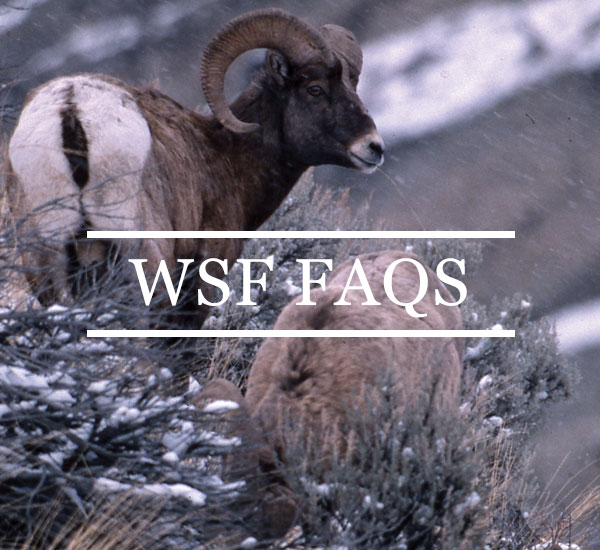 WHAT WAS THE CRISIS THAT PROMPTED THE FOUNDING OF WSF?

From their estimated high of nearly 2 million head prior to European settlement of the West, bighorn sheep numbers plummeted for a variety of reasons, reaching their low point in the 1950s at around 25,000  in all of North America.

WHAT ARE WILD SHEEP NUMBERS TODAY?

Through cooperative efforts by western fish & game agencies and conservation organizations like the Wild Sheep Foundation, bighorn sheep now number more than 80,000 in the western U.S. and Canada. Across North America, current estimates of ALL wild sheep are 170,000 to 190,000, with over 50% being Dall’s and Stone sheep in Alaska, British Columbia, the Northwest Territories, and Yukon.

WHAT ACTIONS HAVE HELPED CREATE THIS CONSERVATION COMEBACK?

More than 20,000 bighorn sheep have been translocated by western fish & game agencies, in over 1,400 discrete transplant actions, over the past 90-plus years. These transplants and restoration of bighorn sheep to many of their historic ranges have largely been paid for via revenues from hunting licenses and contributions from conservation, pro-hunting organizations, such as the Wild Sheep Foundation.

In almost 40 years, the Wild Sheep Foundation has raised and helped direct almost $100 Million toward conservation and management of wild sheep and their habitats. Without adequate habitat, wild sheep, like so many other wildlife species, will simply not survive into the future.

HOW DO HUNTERS HELP THE EFFORT?

Virtually everywhere bighorn sheep are found in 15 states in the West, hunting opportunities are very rare, with licenses issued via highly-competitive lottery systems or drawings. Hunters lucky enough to have hunted wild sheep, and thousands more who are still awaiting their opportunity, have contributed many millions of dollars in license fees and applications, plus excise taxes on firearms and ammunition, to wild sheep conservation and management.

No other segment of society has contributed as much to the conservation and management of wildlife as hunters have, and they continue to do so. Dollars raised and spent by hunters have maintained and/or enhanced millions of acres of wildlife habitat, for literally thousands of species, the majority of which are NOT hunted, fished for, or trapped. Hunting opportunities for wild sheep and other wildlife accrue ONLY as a result of sound, science-based conservation programs and strategies.