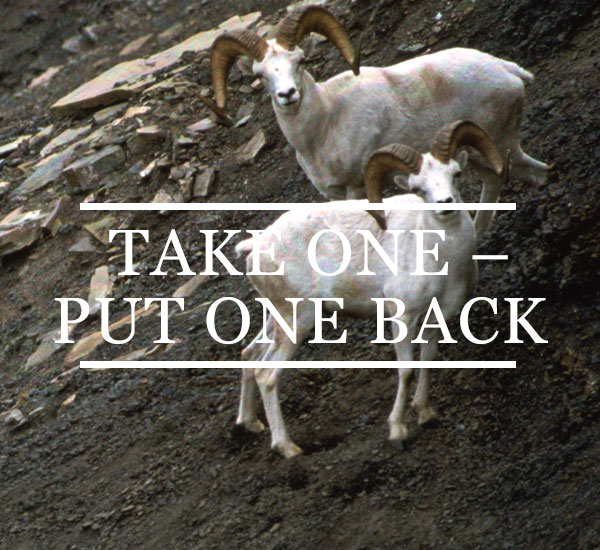 Home | Take One – Put One Back

Take One – Put One Back

The cost to put one sheep back on the mountain was estimated at $4,700 by VP of Conservation Kevin Hurley, as follows:

WSF members make a $5,000 tax deductible donation to WSF to “put one back” when buying a permit or a sheep hunt, draw a special sheep permit, take a sheep or just want to “put a sheep on the mountain.”

Supporters of Take One-Put One Back are recognized at the WSF’s premier event, The Sheep Show®, during the convention’s Friday and Saturday night banquets.

Donors get a numbered sheep ear tag - tag includes WSF logo, featuring the number of sheep the donor “Put Back.”

Funds raised are dedicated to WSF Conservation initiatives to accomplish our Purpose “To Put and Keep Wild Sheep on the Mountain®.

Since the program's inception in 2014, 103 donors have pledged and/or contributed more than $848,500 to put sheep back on the mountain.

Fiscal Year 2017-18
Take One Put One Back Sponsors

Fiscal Year 2016-17
Take One Put One Back Sponsors